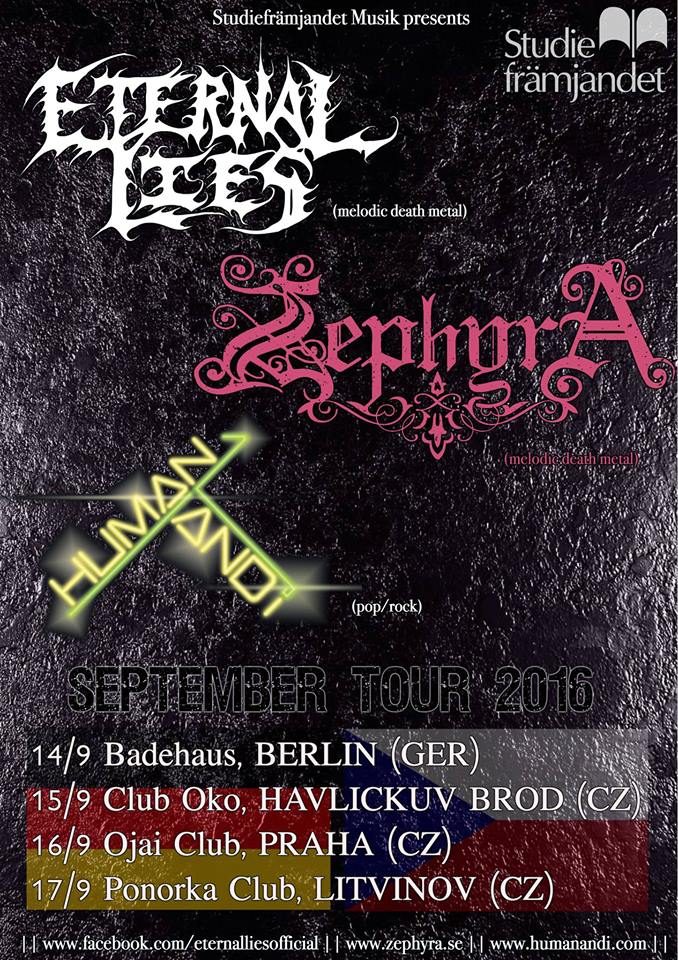 ZEPHYRA
A four piece metal band from Borås, Sweden.
With Åsa´s distinctive female vocals,
Zephyra provides a wide sound in the metal genre,
with the roots in thrash and melodic death metal.

Since the official start back in 2011, the band has released a couple of EP:s, played shows around Sweden (Metaltown, Vicious Rock Festival, Skrik & Panik Fest amongst others), done live shows on the radio, and frequently been aired on american and british radio shows.
After signing a record deal in 2014, the debut album;
‘Mental Absolution’ was released world wide on Wormholedeath label. The album received positive reviews and was followed up by two official videos.

The second full length album; ‘As The World Collapses’,
was recorded in the last quarter of 2015, and mixed/mastered by Christian Donaldson at The Grid (Montreal, Canada).
‘As The World Collapses’ will be released through Inverse Records on August 5, 2016.
With the new album, Zephyra wants to show a bigger and more atmospheric sound than before, heavy and rhythmic, with keyboards and Åsas full ranged, diverse vocals.
A first video from the new album, directed by Greenworks from Gothenburg, was released on June 15.

With 2 European tours coming up, and a second video in the works, Zephyra has a loaded schedule for this fall.

Eternal Lies was formed in 1998 by Björn Johansson (guitar) and Conny Pettersson (drums), also current in Anata, Revengia, Bleed For Me etc.
The first demo was recorded in 1999 with Tommy Grönberg (from Fatal Embrace) on vocals and Martin Karlsson on bass (ex Eucharist).
The demo won “The best demo in Sweden” category in Close-up magazine and a record deal was signed by Arctic Music Group in Florida. The album Spiritual Deception was recorded and released 2002 and was highly praised by the Gothenburg Sound fans around the world.
A live line-up were needed for the shows coming and were completed with Trendkill members Erik Månsson (guitar) and Marcus Wesslen (bass). Requests to play festivals were coming but sadly vocalist Tommy couldn’t make the schedule due to family matters. The band never got to be the same without him and the last gig was done together with Arch Enemy in Halmstad Sweden.

After 12 years Eternal Lies reunited to do the “Metal Reunion PTD3” gig with amongst others Eucharist, Ablaze my Sorrow and Fatal Embrace.
The show was sold out and fans from all over Europe, Japan & USA was there to witness the metal inferno.
Now Eternal Lies is ready for world domination once again. Eight new absolutely deadly songs plus a music video are being recorded in the end of 2016 with the original album line-up:
Tommy Grönberg (vocals), Martin Karlsson (bass), Björn Johansson (guitar), Conny Pettersson (drums) and Erik Månsson (guitar).

Eternal Lies – Leaving only me, live: